Ohitsu to make rice delicious.
Full-sized, shiny rice in an “Ohitsu” is a sight to behold. This will undoubtedly make your rice look and taste more delicious. Don’t miss out on a single day when you can eat rice.
When you put freshly cooked rice into an ohitsu and leave it in for a while with the lid on, as soon as you take off the lid, you can take in an amazing fragrance which words cannot describe. And the rice is shiny and full-size.
The traditional wooden ohitsu will let out only the appropriate amount of moisture contained in the freshly cooked rice. Because it gets rid of the excessive heat and controls the amount of moisture in the rice, you will end up with plump batch of rice with a soft and natural sweetness.

Why rice out of an ohitsu is delicious
The traditional wooden ohitsu absorbs the excess moisture in the rice while it’s warm, and supplements the rice with moisture so as to not allow it to dry. The wood used for the sushi-okes and ohitsus is called "straight grain wood", where the grains of the wood are lined up parallel to each other and run in a single direction. This absorbs and releases moisture evenly, not allowing it to escape while absorbing the moisture from rice that is put in the ohitsu. A wooden ohitsu made of straight grain wood adjusts moisture to keep it to a level. 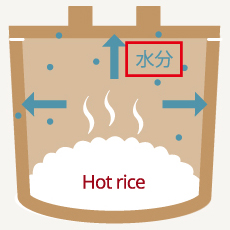 Of course, rice preserved in an ohitsu will gradually cool down. However, even after cooling down, it will release, little by little, the moisture which the wood absorbed while the rice was warm, preserving the moisture content of the rice, keeping it delicious. One could certainly keep the rice cooked overnight in an ohitsu, and have it tasting good until the next morning. We further recommended using it for Bento, as its ability to preserve the rice’s taste pales in comparison to a rice cooker. If the surrounding environment is good, you may be able to keep your rice good for about 2 to 3 days.
Rice with the slight fragrance of wood is delicious even when it has cooled down. Once someone tastes rice out of an ohitsu, it leaves a lasting, unforgettable impression.

Sushi-oke for Chirashi sushi to be laid out gorgeously.
The sushi-oke, also referred to as handai or hangiri, is used when serving and carrying sushi, cooking vinegar rice, as well as cooking and serving Chirashi sushi.
At Shimizu Mokuzai, we manufacture and sell classic wooden sushi okes made from the domestic Kiso Sawara wood.

How to use a sushi-oke to make delicious Chirashi sushi
When you put rice into a sushi-oke, first mix the rice gently and remove any extra moisture. We recommended storing the rice at room temperature outside of direct sunlight after letting the vinegar rice cool down. As only the portion of the rice that has had vinegar put on it is moister than the rest, along with the heat, vinegar rice becomes more delicious if you remove just the right amount of moisture as well.